In the Spring of 2006, a small group of composers and songwriters decided to come together for a late night gathering to share with each other some of our original songs. We were all music directors at various shows on the Las Vegas Strip and we were all writing new theatrical works in hopes of getting them produced. This gathering would give us the opportunity to share our work and critique each other’s work while enjoying an “After Theatre” social setting.

Our first venue was a seedy little club called “Suede” in the “Fruit Loop” area just east of the Las Vegas Strip near the airport. It was fairly basic. There was a baby grand piano that was hopelessly out of tune, and the piano bench was broken so we had to sit on a phone book (remember phone books?) in order to play it. There was one microphone and a DJ sound system with some disco lights, regularly used for the female impersonator shows that were usually held in the room. It was all very low-tech, but there was a kitchen (Suede served a popular Sunday Brunch) and a bar. So for hungry performers after their shows on the Las Vegas Strip, it had most of what we needed to have a fun “hang” as we entertained each other with our new and original songs. We weren’t really an organized event. We were more like a recurring party.

We called it “The Composers Showcase” and it was originally the brain child of Michael Brennan, a local composer.   We invited friends and fellow performers. The showcase was an immediate success.   Admission was free, and Suede made the money off the bar and the food. We kept it going as best we could, considering Suede kept changing management and forgetting that we were coming in for another showcase. We were averaging one showcase per month.

After persevering the uncertainty of Suede for over a full year, we were approached by the president of the Liberace Museum who asked if we would consider bringing the showcase to their charming 90-seat Cabaret room at the now defunct Museum on Tropicana and Spencer. The space turned out to be a jewel, and after working out some details (i.e. sound system, a bar and access to late night food for our patrons), we agreed to give it a shot.   It was a big step up in class. Liberace’s big mirrored piano made a large difference, and we could rely on their management to remember we were coming each month. We began to charge a $5 “donation” at the door for patrons who were not involved in presenting or performing, just to help the Museum with basic expenses. We had no budget, did not advertise, and just depended on word of mouth within the entertainment community.   However, once the local press heard about us and began to write a feature or two about the showcase in local papers and calendar magazines calling us Vegas’ “best kept secret,” we began having to add chairs to accommodate the crowds. We became SRO, “Standing Room Only.”

After a year at the Liberace Museum, rumors began to abound about the Museum’s imminent closing. We began to search for other venues, determined to keep the showcase going. Strangely, Las Vegas has a shortage of cabaret-style venues that could appropriately accommodate a showcase like ours. Fortunately, the Museum managed to hang on for another two years before finally closing their doors. At this point we were still more than a year away from the much anticipated opening of The Smith Center which included a promising new Cabaret venue that we hoped might be a possibility for our Showcase. But for the time being, The Composers Showcase was without a home.

We shopped for other venues but every one of them wanted a large monetary guarantee. We were determined to stay away from gaming establishments since none of our writers or performers were paid. That limited our options. Then a friend introduced me to Will Adamson, a producer of a local Theatre company that had a loft space. Will had never been to a Composers Showcase, but he immediately said “Yes! Let’s do this!” So we began to present the showcase at the “Creative Studios LV,” and our faithful audiences followed us there.

After a few months in the loft space, the mounting of the cabaret setting of the showcase from scratch each time (complete with catering) proved to be cost prohibitive. But Will found us another venue- a jazz atrium at Garfield’s Restaurant in the Desert Shores community. There were some challenges with the venue, but thanks to Jason Outlaw who joined us in our vision and promoted us to the venue, we had several really fun showcases there. In the meantime, we were patiently awaiting the opening of the Smith Center.

In March of 2012, the Smith Center for the Performing Arts finally opened for business, and the “Cabaret Jazz” showroom proved to be a perfect fit for the showcase. We were very fortunate to be invited by CEO Myron Martin and COO Paul Beard to test run a Showcase or two. We were skeptical of filling the room, since we had never had more than 120 people at a showcase audience. Filling 240 seats seemed a daunting task for us since we had no budget to advertise. Plus, the Smith Center attached a $20 ticket price, something we had never done. As it turns out, the price was a bargain for the kind of show we were able to present. The room is elegant, spacious but intimate and very classy. Thanks to Kevin Harvey, the room’s head sound operator who has taken us on as a pet project and who continues to be our MVP, the sound quality of the showcase is world class (such a difference from our days at Suede!) . We continue to be a showcase, no one is paid, and the Smith Center barely makes enough from our ticket sales to keep the lights on and a staff on call for our after-hours (overtime!) event. But we are fortunate to have the support of the Smith Center and the very generous arts and entertainment community of Las Vegas, and we now regularly sell out several weeks in advance.

So, at this writing, we are still going strong, attracting some exciting new talented writers as well as new audiences. Our theatrical writers, some of whom have been with us since our first showcases at Suede, are having great luck with shows they are writing, and attributing that luck in part to the opportunity to work out their material in front of supportive showcase audiences. We are happy to be regularly introducing new talent to the community and providing a platform for writers to present their original songs. Our line-ups are booked at least 2 months in advance and the waiting list continues to grow. Even though our production values have gotten bigger and more involved, we continue to encourage simplicity with emphasis on the music over production. The stakes have definitely gotten higher, and as we look back to our very humble beginnings, at Suede and the years at the Liberace Museum, we feel extremely blessed to be a part of this extraordinary community of artists, musicians and patrons of the arts here in Las Vegas. The bar continues to be raised and we will continue to be vigilant in our attempt to bring the highest quality of new music to The Composers Showcase experience.

Thanks for reading and supporting! 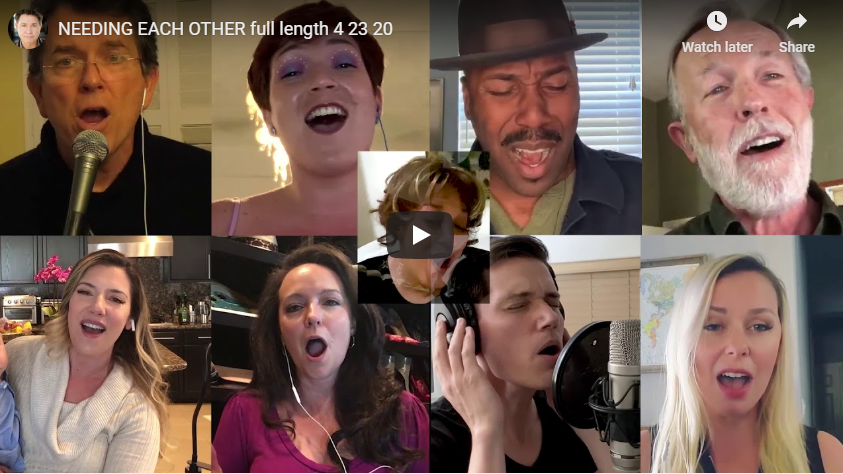 Nearly 100 members of the Las Vegas Entertainment Community came together from behind shelter-in-place and self-quarantine restrictions to donate their time, talent and artistry and create this video of a Keith Thompson original song, "Needing Each Other."

No gigs are currently scheduled.

More On Our FACEBBOOK PAGE !

More On Our FACEBBOOK PAGE !